Tosa faces to the Pacific Ocean in the south and is walled by steep mountains on other three sides, and this made the area rather isolated in old days. The people had to climb up and down the mountains to go out to Osaka, Edo and other areas. It's important to understand the many of these regions were separate territories that developed unique customs from other competing states much in the way Italy developed after the fall of the Roman Empire. Because of this isolation, Tosa traditionally and still to this day have a unique culture from other areas of Japan. You can see this different culture in the knives that are made in the Tosa region.

Many Tosa blacksmiths enjoy making kurouchi knives and the area is known for this type of finish using hammer forge techniques in making their knives. We will be concentrating our efforts to obtain more Tosa knife makers in the coming year. 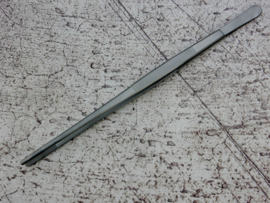