Traditional Japanese knives or Hōchō have been in use in Japan for over a thousand years. The basic knives are the Deba, the Usuba and the Yanagiba but there are many versions and sizes available.

There are 2 forging techniques to be found in traditional Japanese kitchen knives, namely honyaki and kasumi.

Honyaki are forged knives from one type of steel usually Aogami or Shirogami steel. Kasumi knives are laminated knives where a hard carbon steel core layer the so-called Hagane (Aogami or Shirogami steel) is wedged by a softer outer layer (Jigane) of iron with low carbon content. If this Jigane outer layer is made of one type of material, these knives are called Hongasumi. If the Jigane is laminated it is also called "Damascus".

In principle, traditional Japanese knives are single-sided, making them suitable only for right-handed use. Traditional knives for left-handed use can be ordered but the delivery time can be several weeks to months.

In addition to the aforementioned Deba, the Usuba and the Yanagiba, there are many other types:

One of the very special new knives in the range are the sashimi knives from Keijiro Doi, this world-famous knife maker was born in 1927 and is considered by many to be one of the best knife makers of the moment. 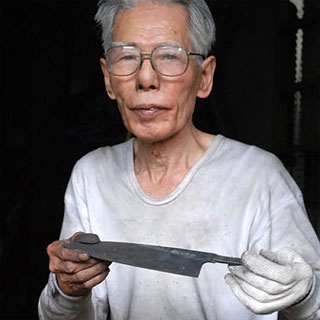 Sort by
Sort by