The Japanese saw (Nokogiri, 鋸) is an unique saw that is used in woodworking, pruning and (Japanese) carpentry. One of the most characteristic features is that the saw works with a pulling movement instead of a pushing movement which is used in the Western sawing. The big advantage is that the blade and the teeth can be made wafer thin. This enables a thin and very precise cut. In addition, the pulling movement ensures that the saw does not fold, break or jam. The pulling saw movement also has the great advantage that significantly less force is required. With a pulling saw movement much less force is needed than with a pushing saw movement. So you can not only saw much faster, it also takes a lot less effort and effort.

The toothing of Japanese saws

Most Japanese saws have a three-sided cut trapezoid toothing on the inside. With laser-controlled grinders, the saw teeth are individually applied and ground. In some brands, the cutting edges are heated by induction and quickly cooled with an air stream. This makes these teeth very hard and wear-resistant and the back of the saw remains flexible.

The toothing of Japanese saws is minimized so that the cut is only a fraction wider than the saw blade. The minimal setting of the saw teeth ensures a perfectly smooth cut and perfect fit. And the finer the toothing, the finer the saw cut.

Japanese saws are available for many types of applications, the Ryoba, kataba and Dozuki saw are the most common:

The Ryoba is a double-sided saw. The fine-toothed silk is ideally suited for cutting transversely to the wood grain (shortening), the other for longitudinal cuts (scabs). The Ryoba cuts quickly and efficiently without ever having to change the saw or saw blade. The Ryoba can be used for various sawing projects and is popular with furniture makers, but also interior builders and restaurateurs. The sawtooths of the Ryoba become finer in the direction of the handle, this stabilizes the blade and ensures that the start of cutting is facilitated. Ryoba saws are available for every application and are delivered in different lengths and dimensions. In Japan the Ryoba saw is the most used hand saw because of its many possibbilities.

Dozuki saws have extremely thin saw blades and are ideally suited for finer sawing. Such as when making precise cuts, for example a list or a dovetail joint. Dozuki means "connected trunk", which means that the saw blade on the back is reinforced. This reinforcement makes the saw more stable. The disadvantage of this back strip is the limitation of the cutting depth. For making precise cuts in thin wood, itn't a problem. The back reinforcement ensures that the extremely thin saw blade (> 0.30 mm) is supported. Due to the back reinforcement, the cutting depth is limited to the height of the saw blade.

Azebiki saw his Ryoba or Kataba saws that are suitable for sawing in flat surfaces. Because the cut is slightly convex polished, it is possible to start sawing anywhere in a plate or plank. Ideal for restoration work or boat building.

Mawashibiki saws were developed for sawing round objects. They are the Japanese variants of compass-saws or the keyhole saws. A keyhole saw is a saw on a reduced version of the compass-saw, with which a larger opening can be made from a small diameter hole. The name of this tool indicates its original application; however, it also comes in handy in various other situations.

You can use a Mawashibiki to cut openings in your house door for the mailbox or for a small window. When looking at the opening for a letterbox or rectangular opening, it is important to use the keyhole saw as little as possible, given its limitations.

Temagari saws are large rectangular handsaws for soft wood (pruning wood) with a progressive toothing. The Japanese word Temagari denotes the traditional 'whale shape' of this type of Japanese saw. Despite the rough toothing, this saw does not have a tendency to "jump" when starting because this saw is not set.

Kuguhiki saws are small flexible saws for cutting dowels and other "sticking out" wooden parts. The saw is intended for leveling surfaces (Flush Cutting Saw). 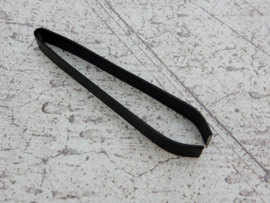