Sakai Takayuki is a well-known knife distributor, from the company Aoki Hamono this supplier sells the best knives in the world, including the knives of Kejiro and Itsuo Doi, Masamoto and Kenji Togashi.

In the 16th century, the city of Sakai was called the Venice of the East and became prosperous as the center of trade between Japan, China, and South Asia with the largest commercial district in Asia. Later, the golden days of the city of Sakai were passed down from generation to generation, which formed the basis for the saying "Everything appears first in Sakai."The origin of Sakai's knives can be traced back to the construction of the Nintoku Mausoleum (Tomb of Emperor Nintoku), which is famous as the world’s largest keyhole-shaped burial mound. At that time, a vast amount of hoes and harrows were needed for the large-scale construction. To manufacture such tools, blacksmiths came from throughout the nation to settlements in the area. During the Tempo era, tobacco from Portugal became popular. As a result, demand for the knives used to cut tobacco leaves increased. Consequently, blacksmiths in Sakai started to manufacture knives. The quality of the knives was recognized by the Edo government of that time, and the knives were authorized as proprietary products of Sakai. The knives were sold throughout the nation and carried the engraved stamp "Sakai Kyoku."Later, when production of tobacco became mechanized and the demand for tobacco knives declined, blacksmiths started to manufacture such kitchen knives as Deba, Yanagiba, and Usuba, which are used by cooks throughout the nation. The traditional manufacturing methods and excellent skills of the craftsmen led to the knives being
designated traditional arts and crafts in 1982. 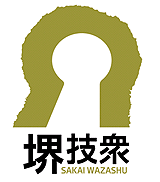 The mark depicts the Nintoku Mausoleum, which symbolizes the city of Sakai, and was adopted as the symbol mark of the Sakai Wazashu (skilled people of Sakai) brand in honor of the excellent civil engineering and iron-making techniques of that time. The title "Sakai Wazashu" is granted to companies that manufacture and market Sakai Brand products after a strict screening process. Sakai Takayuki brand products from Aoki Hamono were authorized, and the title was officially granted by the city of Sakai to the company in April 2006.

Sort by
Sort by